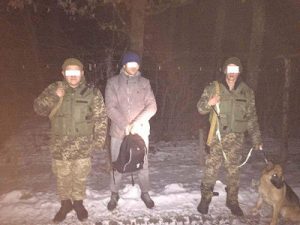 In the course of operative information realization border guards of BS “Uzhgorod” detained 6 citizens of Sri Lanka, 4 – from Vietnam and one from Moldova, who planned to cross the state border and get to the countries of European Union. Thus, in the suburb of the populated area Serednje, Uzhgorod district, the border guards together with the representatives of National Police apprehended 6 persons of Asian appearance. According to the men’s words their nationality was established. They were natives of Sri Lanka having no any documents. However, during the personal stuff examination, five persons happened to have passport documents lacking marks on arrival to Ukraine. Later on, detainees confessed in their intention in the course of the interview aiming to get to EU countries in the search of better life.

Besides, 4 citizens of Vietnam were detained by the border guards in the area of Uzhgorod Railway Station. As usually, the men did not have documents. They rejected to provide any explanations.

One more citizen of Moldova without documents was apprehended by the border guards directly at the Ukrainian-Slovakian border line. Detainee explained that he attempted to reach Italy beyond the check point and oriented in the locality by the help of the compass.

Aiming to clarify the circumstances of the infringement and personal identification of the detainees, all violators were delivered to Detention Centre of Chop Border Detachment. Filtration measures continue.