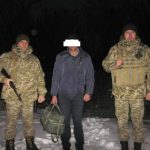 The border guards of Sumskyi Detachment detained the trespasser due to information got from operative subdivisions in the area of Russian-Ukrainian border. The unknown persons was stopped just as he crossed the border from Russia. The law enforcement agents established the reason of crossing the border immediately. It was learned that passport document of 45-year-old citizen of Azerbaijan contained the mark of State Border Guard Service on prohibited entrance to Ukraine for the term of three years. So far, protocol on state border crossing is drafted as to this person, the case is forwarded to the court. Filtration-verification events are performed.