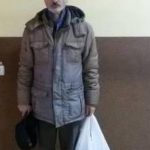 Border guards of BS “Uzhgorod” of Chop Detachment apprehended a trespasser close to Ukrainian-Slovakian border, who attempted to cross the border in illegal way. Local residents informed law enforcers about the appearance of the stranger close to the state border, in the area of Uzhgorod airport. Aiming to verify received information, searching actions were started immediately. Soon, the foreigner was detained in the distance of 1000 m from the border. The man did not have any documents, however, introduced himself to be the citizen of Iran, YOB 1959. He refused to provide any explanations. Besides, later on, in the course of the interview it was learned that this citizen had been apprehended for the third time. Aiming to establish the circumstances of the infringement the detainee was delivered to Temporary detention Centre of Chop Border Detachment. So far, verifications measures continue.