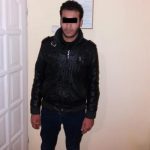 Citizen of Egypt intending to cross illegally the state border was stopped recently by the border guards of Mostytskyi Detachment. The members of a Public Association informed the border guards about the stranger’s appearance in the suburb of one of the border villages.

Upon arrival of reaction group it was revealed that detainee was a citizen of Egypt undocumented, 1996 year of birth. The man aimed to bypass the check point on foot trying to cross the border and reach neighboring Poland in illegal way. Currently, the person is detained in administrative order, in future he would be held accountable for attempt to break the state border of Ukraine.