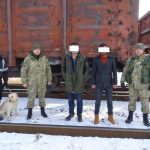 Two foreigners, jumping into the cargo train underway, were noticed and detained in Lviv region by the border guards of Mostytskyi Detachment. During the service performance in the check point “Mostyska-Railway Station”, border guards revealed two person indenting to get into the cargo train unnoticed. Unknown person overcoming the barrage fence jumped into the train underway, which made its way to Poland upon control procedures completion. The train was stopped by military men. A citizen of Azerbaijan, 30 years old, and a citizen of Turkey, 24, were found in one car. As it was established, the foreigners arrived to Ukraine in an established order, and then they decided to get to EU countries avoiding all types of border control. Protocol on attempt to cross the state border was drawn as to Part 2 Article 204-1 of Administrative Infringement Code of Ukraine with regard to the violators. The persons are apprehended in order to establish the circumstances of the infringement and are placed to Temporary detention Centre.