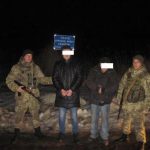 Two persons passing beyond the check point were apprehended by the border guards of BD “Milove”, Luhansk Detachment. Unknwn persons made their way towards Russian border being noticed by the district inspector of Border Guard Service and notified the Border Detachment on this issue. The reaction group started at the specified place nad detained the violators 5 meters before the border, close to the village of Milove. One of the detainees was the citizen of Ukraine, the other – from Armenia. When performing verification measures it was established that Armenian had his USSR passport of 1974. Protocol was drafted as to the detainees on violation the state border being referred to the court. Also, the citizen of Ukraine was registered in the Pretrial Investigation Unified Register considering the criminal offence stipulated by the Article 332 of Crime Code of Ukraine (Illegal transportation through the state border of Ukraine). The persons were handed over to the staff of National Police.

Besides, 2 citizens of Armenia were apprehended by the reaction group of BD “Rava-Ruska”, Lviv Detachment nearby the border on Poland due to the received information from local residents, who noticed strangers within the border area. The travelers were stopped some metres before the border line. Protocols on attempt to violate the state border were issued as to the citizens of Armenia, who had the Armenian national passports. By court decision, the were fined for 3400 UAH each.