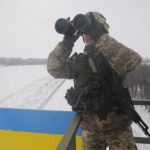 Close cooperation of State Border Guard Service with the border guards of neighboring countries bordering on Ukraine continues to bring positive results. Thus, 2 violators of the border were caught in a result of efficient interaction between border guards of Ukraine and Slovakia. When border guards of BD “Uzhgorod”, Chop Detachment patrolled the border area, an alarm device operated and unknown persons were noticed in the direction of Ukrainian-Slovakian border. Ukrainian law enforcers informed Slovakian border guards immediatedly and as a result in the course of searching actions and information exchange two persons were apprehended once they passed the border. Soon, it was established that night “travelers” arrived from Mongolia. It is worth noting that appearance of illegal migrants from Mongolia, which is practically was not fixed recently, may point to the fatc that the organizers intended to adjust the illegal migrants transportation channel from this country. However, in a result of joint actions conducted by Ukrainian and Slovakian border guards, their intent to reach EU failed.

Generally, during the year 2016 about 10 illegal migrants were apprehended – citizens of Mongolia trying to cross the state border in illegal way.