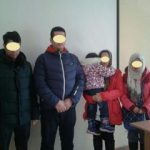 Five citizens of Afghanistan, two of them children, were revealed by the border giards of Chop detachment when performing verification actions in the town of Uzhgorod. Upon district inspector’s request the foreigners could not present their documents confirming their stay within the territory of Ukraine. As it was established later on, detainees had already intended to cross the stat border last year for the second time. Aiming to clarify the circumstances of infringement the family was delivered to Temporay Detention Centre of Chop Detachment, and upon persons identification they will be called to administrative responsibility.