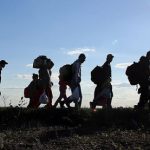 The Parliament of Hungary has passed the bill due to which all refugees in the country shall be automatically placed to closed transit zones without a right to leave them.  The law adopted by the overwhelming majority of Hangarian Parliament deputies on March 7, provides that all applicants for asylum aariving to the country as well as refugees still staying within the territory of Hungary shall be placed to the camps located at the southern borders of the country. They will prohibited to move along the territory of Hungary or leave the country until their application asylum granting are under consideration by the competent bodies of the country.

“In future illegal migrants will have to expect for the verdict as to asylum provision in special transit zone at the border” – it is said in the adopted law by Hungarian Parliament.

This document restore the practice of refugees’ actual imprisonment in Hungary, which was suspended in 2013 through press of Brussels, UNO Agency on refugees’ issues and European Human Rights Court. In February 2917, the international human rights organization Amnesty International criticized the Hungary’s plans calling them as ignoring the major principles of EU and violating the human rights.