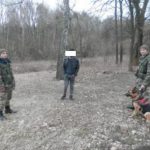 Border guards of Lviv Detachment detained the citizen of Tyrkey intending to cross the state border beyond the check point. Border guards of BD “Rava-Ruska” revealed the violator by means of thermal imager. As it was established soon the 37-year-old citizen of Turkeyhad intended to cross the state border already for the second time a month. So far, the administrative protocol is issued as to the foreigner’s infringement, the case is passed to the court.