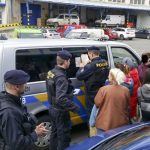 Czech Police arrested 85 foreigners during the raid, who had been working illegally in Prague at the stock of the Internet shop Rohlik.cz. Almost all detainees were Ukrainians. Police reportes that 74 persons will be deported. Administrative procedures will be applied with regard to others, most likely they are to be deported as well. The Company in which Ukrainians worked, rejects the violations explaining that the employees were sent on business trip from Polish firm, which is not prohibited by EU legislation. However, it was Polish building firm and under the law it had no any right to send its employees to the bussines trip to the stock. Also, it is mentioned that approximately $950 (about 25 000 UAH) is paid at the stocks per month. The citizens of Czech Republic refuse to be employed for this salary, thus, local firm hire foreigners and often act avoiding the law.