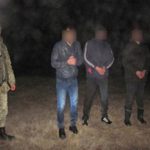 The operative staff of State Border Guard Service detained the violators of the state border of Ukraine in Summy region. Border detail servicing close to the state line in the direction between Russian and Ukrainian villaged, revealed four persons crossing the border from Russian territory in illegal way. During detention one person noticing border guards started to run in a return direction, the others were apprehended. These were two citizens of Ukraine and one of Uzbekistan having no any identifying documents. So far, the citizens are delivered to Border Department to conduct filtration measures. Corresponding administrative materials were drawn up as to two Ukrainians, local residents, considering the illegal cross of the state border of Ukraine. In addition, notification was forwarded to Glukhiv Police Department about criminal infringement signs stipulated by Article 332 (illegal transportation of persons through the state border of Ukraine) of Crime Code of Ukraine. The citizen of Uzbekistan being undocumented is detained for three days in order to identify him, then he will be called to administrative responsibility for illegal cross of the Ukrainian state border.