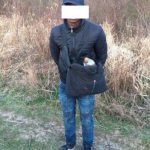 Border guards of BD “Kosyno”, Mukachevo Detachment apprehended 22-year-old young man attempting illegally to get neighboring Hungary. During patrolling border guards noticed an unknown person moving towards the border. The law enforcers started to the place of detention immediatedly. Detainee was the citizen of Nigeria having Ukrainian Temporary Residence Certificate. In the course of filtration actions border guards established that the foreigners had already been detained more than a year ago by the officers of State Border Guard Service for attempt to cross the state border illegally. After that, the Nigerian had been living in Volyn Temorary accommodation Facility for a year. The man did not leave intentions on improving his life conditions in one of EU countries and this time he chose Ukrainian-Hungarian area in Transcarpathia. Currently, the detainee is delivered to Mukachevo Border detachment. His further destiny will be defined by the court.