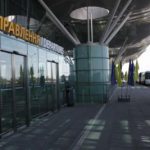 When performing passport control, the border guards of separate check point “Kyiv” revealed 4 forged documents. Citizen of Georgia was apprehended in the Kyiv airport., who presented Ukrainian Temporary Residence Certificate, besides required document. It was established that the certificate contained signs of complete forgery. The foreigner attempted to depart by flight “Kyiv-Tbilisi”. Sso far. The person is called to administrative responsibility as to Art. 203 Part.2 and handed to the officers of National Police.

Border guards of Boryspil Airport detected three invalid visas. The citizens of Turkey planned to use them when travelling by transit from Istanbul. One of details had some doubts of visas validity during the control. N the course of detailed verification it was established that visa forms were stolen. The citizens intended to depart to Frankfurt. Currently, the persons returned by a back flight.