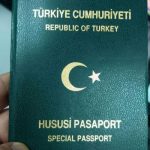 Border guards of separate check point revealed forged special passport of the citizen of Turkey in the international Boryspil Airport. Travelling to Ukraine from Morocco by transit via Paris, the woman provided documents of Turkish citizen for passport control. However, border detail had doubts as to validity of passport document during the performed control. In a result of document examination by means of technical control means it was established that it contained signs of complete forgery. The citizen (woman) of 1976 birth year was rejected in crossing the state border, the document was confiscated. In the nearest future she will be returned by a back flight.