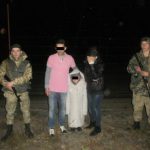 State Border Guard Service of Ukraine continues perform system actions on termination unlawful activity at the state border of Ukraine, besides, those related to smuggling illegal migrants to EU countries. Thus, the border guards of BD “Rava-Ruska”, Lviv Detachment, upon available information detected a man and woman due to night vision device, who intended to cross illegally the state border of Ukraine with under age child, in the frames of “Border-2017” operation. Starting immediately to the specified place of infringement border guards stopped the foreigners 800 m before the border line. Detainees did not have any documents, according to their words they introduced as the citizens of Syria and intended to get to one of the countries of European Union. They took a child (2012 YOB) to this trip. Currently, 3 citizens of Syria are delivered to border department to clarify the circumstances and preparing administrative documents.