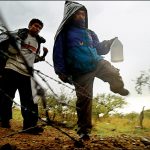 Five foreigners attempting to cross the border beyond established points were detained at the “green” border by the staff of State Border Guard Service in Transcarpathia. Thus, border guards of BD “Kosyno”, Mukachevo Department apprehended a citizen of Eritrea 300 m before the border on Hungary at night. Border patrol of BD “Luzhanka” of the same detachment stopped 1 citizen of Armenia 50 m before the Ukrainian-Hungarian border. Also, some ten meters before the border line the militaries of BD “Uzhgorod” and “Novoselytsya”, Chop Detachment, detained 2 citizens of Turkey and 1 from Afghanistan close to Slovakian border.

All detainees were delivered to border subdivisions for further verification and drawing up administrative protocols.