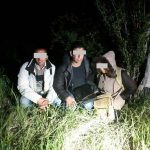 In the frames of operation “Border 2017” the staff of State Border Guard Service received and verified information about possible transportation of three illegal migrants over the state border to EU countries. Almost at midnight three persons, probable violators, were noticed at the border in Transcarpathia. Information on this point was reported to the border guards of BD “Kosyno”, Mukachevo Detachment. In a result of the search three persons were detected. They attempted to run away during the detention, however, they failed. Two of them were the citizens of Algeria and one from Yemen. Two men, aged 33 and 37, and 32-year-old woman were stopped 300 m before the border. These persons are kept in Temporary Detention Facility. Protocols were drawn up for attempt to cross the state borders, the case is forwarded to the court.