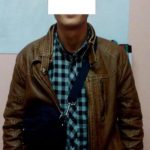 Two citizens of Morocco and one from Armenia were revealed by the border guards at night by the border guards of Chop Detachment at railway station Velykyi Bereznyi, Transcarpathia. Three foreigners arrived by train “Lviv-Solotvyno” and had documents, the term of which completed. During interview and establishment of their goal to stay in controlled border area, the law enforcers found that foreigners’ actions contain signs of violation stipulated by Article 204-1 of Administrative Violations Code of Ukraine 204-1 “Illegal cross or attempt to cross the state border of Ukraine”. So far, all circumstances are under investigation. Upon protocols drawing up they will be delivered to Temporary Detention Facility. Cases are passed to the court.