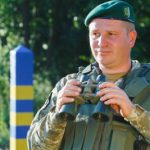 During the night the staff of State Border Guard Service apprehended 6 violators attempting to cross the border in illegal way. They were the citizens of Turkey and Moldova. Four citizens of Turkey were detained in Bukovyn in the morning. Information about violators’ intention was received by the border guards of Chernivtsi Detachment from operatives. The group of travelers, consisted of a woman and three children, was stopped 500 m before the border. They did not have any documents. Currently, further verification measures are performing as well as persons involved in the case are established, who assisted the migrants in their illegal trip.

The migrant from Moldova was caught in Odessa region by the border guards of BD “Chorea”, Podilskyi Detachment. He also got to Ukraine at night and was noticed by the border detail by means of technical means of border control.