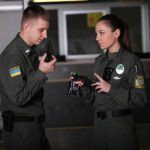 Two foreigners using other’s and forged documents in order to cross the border were detained by the State Border Guard Service at the “Lviv” and “Boryspil” Airports. In particular, a citizen of Turkey, who traveled from Tehran to Barcelona, ​​was revealed in the capital’s airport. During the control a false passport of the citizen of Iran was found in his stuff, where information page was replaced. For this violation the man will be returned by a back flight.

Lviv border guards detained a citizen of Iraq. The foreigner planned to depart to Rome. To pass the passport control, he provided the passport of Bulgaria’s citizen, but the border guards established that the document did not belong to him. Afterwards, the real document of the citizen of Iraq was found. The offender is currently detained and his personality is established.