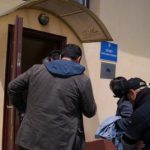 As it was reported before, border guards of Chernivtsi Detachment detained a group of illegal migrants from Turkey in the framework of Operation “Border-2017” in Bukovyn.

Four foreigners were found by the border guards of BD “Krasnoylsk” according to available operative information. There were three men and a woman. According to their words it was learned that they were the citizens of Turkey planning to cross illegally the state border and got to Romania. During the detention one of the foreigners offered the military bribe in the amount of $100. The border guard rejected to accept this offer, and prepared corresponding documents as to the violators. Besides, Ukrainian border guards informed their Romanian colleagues about revealing the illegal migrants in this direction in order to close the border from both sides.