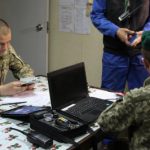 When performing border control in the check points the staff of Kherson Border Detachment continue reveal violators attempting to get to the territory of Ukraine using forged and invalid documents. Thus, the border guards of check point “Mykolaiiv” in the check point “Special Marine Trade Port” detected two citizens of Egypt with forged passport documents at the foreign ship. The signs of falsification and modification of constituent data were established in the documents. Currently, the staff of State Border Guard Service did not pass Egyptians to Ukraine, passports were handed over to the ship captain for storage.