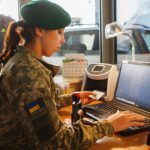 Border guards of Mostytskyi detachment, Lviv region, did not admit a citizen of Turkey to cross the check point “Shegeni” at the border on Poland.

During border control at exit from Ukraine the inspector’s attention was drawn by a passport of one of the travelers. The man provided passport of Bulgarian citizen for control, however, a series of signs testified about possible forgery of the document. Thus, border guards initiated a thorough verification. According to the results of performed verification, it was established that this document was completely forged, the traveler understanding his intentions to be exposed, he confessed to be the citizen of Turkey and showed real documents. The law enforcers clarified that the citizen, 1977 YOB, arrived to Ukraine in legal way. He purchased and received forged document from abroad. He made his way to Europe in the search of some job. The violator was apprehended for attempt to cross illegally the state border of Ukraine. Decision on his case will be made by the court. Also, the border guards informed National Police of Ukraine about detection of criminal offence evidences as to the article 358 of Crime Code of Ukraine “Falsification of document, stamps, seals and forms, their sale, use of forged documents”.

Besides, border guards revealed and detained a citizen of Iraq in the check point “Odessa-air” when checking in passengers for the flight to Austria. As it was established by the border guards during documents verification, the man intended to get to Europe using the passport of stateless person of Germany. The trespasser is apprehended until he will be identified. Then, he will be called to administrative responsibility for attempt to cross illegally y the state border of Ukraine.