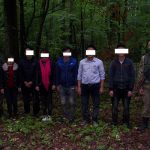 Several groups of Vietnamese were apprehended in Transcarpathia at night by Ukrainian and Slovakian border guards in the course of measures performed on counteraction to illegal migrants’ transportation over the border. Slovakian colleagues informed about appearance of some persons nearby the border. In a result of organized searches at both sides of the border, the officers of two countries detected and detained several groups in the number of 15 persons. As it was established by detainees’ words, there were 10 men and 5 women, they arrived from Vietnam and made their way to EU in the search of some job. The searches of other possible violators go on, who might were together with the detainees and persons involved in their smuggling.