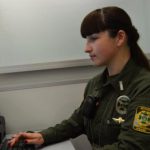 Border guards of Separate Check Point “Kyiv” revealed passport documents not belonging to the bearers in the International Airport Boryspil. When performing passport control, besides during persons’ identification, the border guards had doubts in belonging this passport documents to persons provided them. In the course of verification it was established that two citizens of Iran arrived by the flight “Istanbul-Kyiv” and “Erevan-Kyiv” planned to present partially forged document of Turkish citizen. In addition, when performing filtration actions, it was clarified that the citizen, who had to get the forgery and use it in future to depart to Great Britain, paid for these services $20 ths.

In both cases, the persons were returned by the back flight.