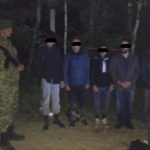 Special frontier operation “Border-2017” continues in Bukovyn providing positive outcome. Thus, the border guards of BD ”Krasnoylsk”, Chernivtsi Detachment, detained 5 illegal migrants attempting to cross Ukrainian-Romanian border in illegal way. When verifying operative information about possible unlawful activity at the border, the border detail detected a group of persons at night moving towards Romania. During detention, the foreigners did not put up resistance and did not manage to escape; as they got lost and oriented themselves not well in the mountainous wooded locality. None of the detainees had documents. Soon, it was established that all detainees were the citizens of Turkey. Currently, all circumstances of the infringement are examined.