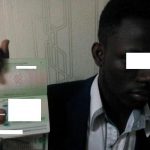 Passenger train “Kyiv-Warsaw” arrived to the check point “Yagoryn” to exit Ukraine at night. During border control, the border guards of Lutsk Detachment revealed someone’s passport in the stuff of one passenger. In the course of document verification it was established that passport provided for border control did not belong to its bearer. The man presented the passport of the citizen of Ghana, however, of another person. Afterwards, he provided his real passport document of the citizen of Ghana. He intended to use someone’s passports in order to cross illegally the state border. His case will be considered in the court.