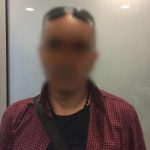 Border guards of Separate Check Point “Kyiv” revealed one citizen with partially forged document during passport control of the passengers from the flight “Istanbul-Kyiv”. Upon verification of Greek citizen’s passport, the border inspector doubted in validity and belonging of this document to the bearer. Already in the course of thorough examination it was established that this passport contained the signs of partial forgery, namely the replacement of the informational page. Also, the border guards found the real passport of the citizen of Turkey when checked his stuff. Later on, during the interview the foreigner informed about his intention to get to Canada, and he bought the packet of forged documents in Istanbul for $ 14 000. So far, the person expects for return by a back flight to Istanbul. Decision was also made as to ban his entrance to Ukraine for a period of three years.