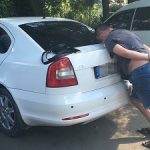 The staff of Security Service of Ukraine in cooperation with police under procedural guidance of prosecution Service caught the members of organized grouping, who arranged smuggling of illegal migrants to the countries of European Union. Authorized operatives of SSU Department in Ivano-Frankivsk region established that a group of Transcarpathian residents had arranged illegal channel through the check point “Luzhanka”, Mukachevo Border Detachment. Law enforcers apprehended four persons during their attempt to smuggle the inhabitant of Ivano-Frankivsk region, who by court decision was restricted to exit the territory of Ukraine due to his credit obligations. The malefactors got 2500 € for provided services.

SSU officers also detained one more member of this grouping at the place of his residence in Ternopil. During the search the law enforcers confiscated 15 passports for travelling abroad of the citizens of Ukraine, $30 000, 10 000 GBR, 10 000 UAH, and other evidences of criminal activity, in particular, the notebooks with surnames and sums.

Proceeding has been commenced for signs of criminal offence stipulated by Part 3 Article 332 of Crime Code of Ukraine. Urgent investigative actions are continued.