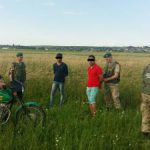 Three foreigners travelling beyond the check points were apprehended close to Ukrainian-Romanian border by the border guards of BD “Porubne”, Chernivtsi Detachment. The foreigners were noticed by the district inspector in the suburb of the village Terebleche, Hlybotskyi district, almost 800 m before the state border. He called reaction Group for help. The men did have any identifying documents. According to their words it was established that they were the citizens of India aged 27 and 28 making their way to the countries of European Union for further employment.

Afterwards, the citizens of India were delivered to border subdivision for performing filtration measures. Currently, actions are continued as to detection of all circumstances of the infringement. Further destiny of the foreigners will be defined by the court.

In Odessa region the border guards of BD “Kuchurgan”, Bilgorod-Dnistrovskyi Detachment, apprehended the citizen of Russia. He also attempted to cross the border beyond the check point and had no any documents. However, border patrol detained him 100 m before the state border. Documents were drawn up as to the violator for his attempt to violate the state border; the case was forwarded to the court.