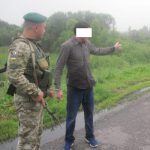 Two foreigners attempting to cross Ukrainian-Russian border were apprehended by the border guards of Sumy Detachment. One of the violators decided to get to Ukraine beyond the check point “Bachivsk” in the direction of Russia village. During the documents verification procedure it was established that the man did not have any, he introduced as the citizen of Georgia. This person was apprehended for the period of 3 days in order to identify him. Afterwards, protocol on administrative infringement will be prepared for illegal cross of the border.

One more violator was detained by the military men of BD “Bilopillya” early in the morning when special device out 10 meters before the border. According to the results of verification it was established that detainee had been a citizen of Moldova, who exceeded the stay term within Ukraine for 164 days. Corresponding materials were drawn up at to the citizen for his attempt to cross the state border and decision was made as to his compulsory return to the country of origin.