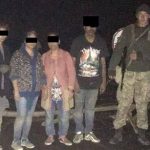 The border guards of BD “Velyka Palad”, Mukachevo Detachment, detained four illegal migrants from the Southern Asia in the frames of operation “Border-2017”. One man and three women were stopped by border detail 50 m before the Ukrainian-Hungarian border. Detainees had no any documents. They reported the border guards to be the citizens of Pakistan and intended illegally to cross the border on Hungary, and then to improve their life conditions in one f EU countries. Detainees were delivered to border subdivision. So far, filtration-verification measures continue, the circumstances of infringement are established. The protocols on administrative infringement are prepared as for the foreigners for attempt to cross the state border; the case will be passed to the court