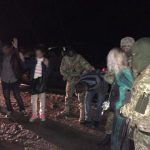 The staff of State Border Guard Service together with the representatives of National Police and under control of Lviv Public Prosecutor’s Office revealed and detained the organizer of illegal transportation of Asian migrants to Europe. Yet, at the beginning of the year, the Operative Subdivisions of State Border Guard Service of Ukraine have received information about arrangement of smuggling channel in Lviv region to Poland. It was managed to establish that the citizen (woman) of Ukraine was the initiator of this illegal business. Also, the border guards documented three facts of Turkish, Pakistani and Bangladesh citizens’ transportation from Ukraine to EU. The whole mechanism and scheme of unlawful activity of the organizer and her accomplices was disclosed. Afterwards, the operation was performed on their simultaneous detention.

A minivan was stopped in the suburb of Rava-Ruska with four migrants from Pakistan and Turkey accompanied by the organizer and accomplice. At the same time, tow other accomplices involved in the illegal migration channel were apprehended in Lviv region. The members of unlawful grouping were declared to be suspicious in crime commitment stipulated by Part 2 Article 332 of Crime Code of Ukraine and placed to the Temporary Containment Cell. Currently, a preventive measure was applied to the detainees in the form of imprisonment.