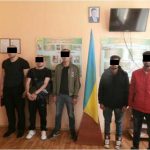 The staff of State Border Guard Service of Ukraine detained two groups of illegal migrants from India in the course of operative actions.  Thus, border guards of BD “Goronglab”, Mukachevo Detachment, detained two illegal migrants from India and their smugglers. Local residents informed about appearance of a car, a driver of which asked for way to the border, within the frontier area. Yet, border guards apprehended found mentioned car and stopped it for check in some minutes in the suburb of the village Danylivka, Berehovo district. Except the driver there were four more persons inside the car, two of them were the citizen of India, one person from Germany and one from Ukraine. Aiming to clarify all circumstances of the infringement detained persons were invited to the Border Guard Department. During interview the border guards established that Indians intended to get illegally to one of EU countries. The citizens of India also reported that citizen of Ukraine and Germany accompanied them promises to help crossing the border. As to this fact, the notification on criminal offence according to Part 2 Article 332 of Crime Code of Ukraine (Illegal transportation of persons through the state border of Ukraine) was forwarded to Berehovo Department of National Police Head Office in Transcarpathian region. The protocols on attempt to cross the state border were drawn up as to Indians; the case is forwarded to the court.

Besides, border guards of BD “Uzhgorod”, Chop Detachment, detained two citizens of India nearby railway station of Uzhhorod town. Information about two Asians asking to deliver them to Ukrainian-Slovakian border was received by operative agents of Border department. Detained Indians were placed to Temporary Detention Facility of Chop Border Detachment. Upon clarification of all circumstances they would be called to administrative responsibility as to Part 2 article 204-1 of Administrative Infringement Code of Ukraine (Violation or attempt to cross the state border of Ukraine).