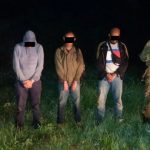 In the frames of operation “Border-2017” the border guards of Mukachevo Detachment detained four foreigners intending to get illegally to Hungary. Border guards of BD “Kosyno” in the course of operative information verification at night detained 43-year-old citizen of Iraq and two 24-year-old citizen of Palestine. The foreigners intended to improve their life conditions in one of the countries of European Union.

One more illegal migrant from Azerbaijan was apprehended by the border detail of BD “Bodalovo” in the morning. Local resident informed about appearance of unfamiliar person in the border area. 28-year-old foreigner was detained 400 meters before the border. Protocols were drawn up as to all detainees for attempt to cross the state border; the cases will be forwarded to the court.