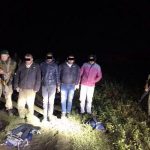 Border guards of Kharkiv Detachment apprehended a group of illegal migrants. Border guards of BD “Zolochiv” detected the movement of 4 unfamiliar persons by means of the mobile thermal device, who were traveling from the border in the direction to the populated area Udy. The violators were 2 citizens of India, 1 – from Pakistan and one stateless person. However, according to the words of the last, he was the citizen of Ukraine. Soon, it was established that Ukrainian assisted foreigners in illegal cross of the border and accompanied them by the territory of Ukraine. Documents on administrative infringement were drawn as to the detainees with regard to their illegal border cross. The Ukrainian is threatened with criminal responsibility under Article 332 of CCU (Illegal transportation of persons through the state border of Ukraine).

Border guards of BD “Tymkove”, Podilskyi Detachment, found two citizens of Moldova nearby Ukrainian-Moldavian border, who also planned to cross the border in illegal way. Protocols documented as for calling to administrative responsibility under the Article 2 Part 204-1 of AICU (Violation or attempt to violate the state border). The cases are forwarded to the court.