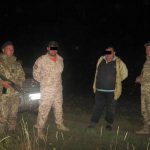 Two citizens of Russia were apprehended by the border guards of Sumy Detachment for illegal cross of the border of Ukraine. Guarding the state boundaries, the border guards of BD “Krasnopillya” noticed the car registered in Russian Federation at the neighboring territory. It was moving towards the border. Border detail stopped transport vehicle already on the territory of Ukraine. There were 2 citizens in the car, 1975 and 1987 year of birth, the residents of border area. The men did not have any documents for the car. According to the words of the detainees they gathered woods and got lost, they took the car from their friend. Currently, the vehicle was confiscated and handed to the staff of SFS. Protocols were prepared as to the foreigners on administrative infringement for illegal cross of the border. Verification measures go on.