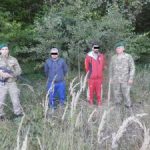 The staff of State Border Guard Service detained two illegal migrants near the Ukrainian-Polish border in the frames of the joint special border operation “Border-2017”. Information about unknown persons of non-Slavic appearance being in the suburb of the settlement Borovets border guards received from local residents. During the information verification, the border guards of BD “Rava-Ruska”, Lviv Detachment, apprehended two men without documents near the border. According to the detainees’ words, it was managed to establish that they were Turkish citizens and intended to enter the EU countries in illegal way. The border guards took detained citizens to the border detachment in order to clarify the circumstances of the offense, provided for in the Part 2 Article 204-1 “Illegal cross or attempt to cross illegally the state border of Ukraine”, and to draft administrative materials.