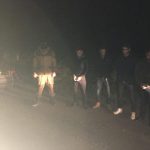 Four illegal migrants were apprehended by the border guards of Chop Detachment in the frames of joint special operation “Border-2017”. Information about the possible occurrence of a group of illegal migrants near the state border was received by the law enforcers in advance from the operation agents of the State Border Guard Service. Therefore, the measures on border protection were reinforced and additional details were sent to the area. Soon, a joint interdepartmental group of border guards of the Chop Detachment, operatives from the Western Regional Directorate of the State Border Guard Service and officers of the National Police on the stopped the car in the suburb of Perechyn town. The resident of Mukachevo attempted to transport two citizens of Syria and two citizens of Algeria to the border.

Currently, the detained foreigners are delivered to the Perechyn Police Department in the Transcarpathian region for preliminary investigatory actions. Upon appropriate filtering measures conducted, they would be called to administrative responsibility under Part 2 of Article 204-1 AICU “Violation or attempt to violate the state border”. The driver transported the foreigners, preliminary qualified as committing the crime provided for the Art. 332 CCU “Illegal transfer of persons across the state border of Ukraine”.