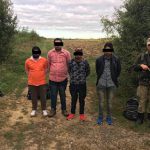 Four illegal migrants were apprehended in Transcarpathia. A group of persons appeared nearby the village of Popovov and made their way towards state border, which was then apprehended by the border detail of BD “Kosyno, Mukachevo detachment. Reaction group and power support from operative department started immediately to the place. In a result of joint searching actions the service men detained 4 men without document, according to their words citizens of India, 500 meters before the border. The trespassers were delivered to Border Department for drawing up procedural documents. They will be placed to Temporary Detention Centre.

It will be recalled that the day before border guards of Chop Detachment, operative agents of Western Regional Department of State Border Guard service and officers of National Police stopped the car in the suburb of Perechyn town, by which the citizen of Mukachevo attempted to take two citizen of Syria and two citizens of Algeria to the border.