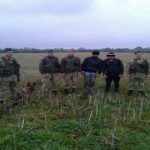 The border guards of the Mostytskyi and Summy Border Detachments found foreign trespassers, who intended to cross illegally the state border. In Lviv region, the staff of Border Department received information from the local residents about the movement of unknown persons near the Ukrainian-Polish border. For verification of information, the border guards of the BD “Shegeni” immediately started for searches. Soon, two Turkish citizens were found without documents at the border 1000 meters before neighboring Poland. They were moving towards the neighboring country in order to cross illegally of the state border. And the border detail of the BD “Seredina-Buda”, Summy Detachment, not far from the Ukrainian-Russian border, revealed a Moldovan citizen who also intended to illegally cross the border. The offender is currently detained. The protocols were drawn up as to the foreigners on bringing them to administrative liability under the Part 1 and Part 2 Article. 204-1 of AICU. The cases are forwarded to the court.