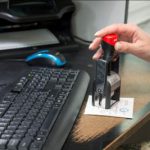 Border guards of Separate Checkpoint “Kyiv” revealed a foreigner attempting to get to the countries of European Union by forged document. The violator, a citizen of Pakistan, was stopped in the International Boryspil Airport. He traveled by transit via Kyiv to Frankfurt, Germany. When performing border control it was established that presented permission on residence in Italy was completely forged. Currently, 29-year-old citizen of Pakistan expects for his return by a back flight.