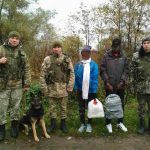 The border guards detained six illegal migrants from Liberia and Bangladesh who tried to go to Poland and Hungary illegally. The border guards of Mostytskyi Detachment received information from the inhabitants of the settlement Shegeni about the movement of unknown persons near the Ukrainian-Polish border. Already in an hour, 400 meters from the border, the law enforcement officers detained two citizens of Liberia. The offenders intended to get into Polish territory beyond the check point. Protocols have been drawn up as to two detainees in accordance with Part 1 of Article 204-1 of the AICU.

Four more illegal migrants were exposed by the border guards of the Chop Detachment. The district inspector of BD “Tysa” found the car “Mercedes” of Czech registration with foreign passengers, citizens of Bangladesh, a kilometer before the Ukrainian-Hungarian border. As it turned out, the offenders were the students of Uzhgorod National University studying at the Faculty of Medicine. The foreigners whose actions were offensive provided for in the Article 202 of AICU “Violation of the border regime” and Article 206-1 “Illegal transportation of foreigners and stateless persons through the territory of Ukraine” were delivered to the departments of the Border Guard Service. The cases will be forwarded to the court.