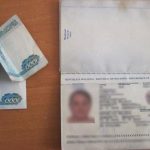 Two violators from Moldova and Ukraine with invalid passport documents were revealed by the border guards of Ukrainian-Russian border. When checking the passengers of “Moscow-Odessa” train in the railway check point “Konotop” the border guards of Summy Detachment revealed a citizen of Moldova, who was banned to enter Ukraine. In the course of further verification the border guards established 26 forgery marks of the SBGSU on Ukrainian border crossing in her passport document. Aiming to solve the issue on unobstructed border cross the citizen of Moldova offered the border guard a bribe in the amount of 2000 RUR to what she was conclusively rejected. Currently, 37-year-old Moldavian is returned by a back flight in an established order to the Russian Federation.