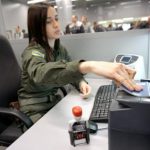 The State Border Guard Service of Ukraine continues to take measures in order to prevent illegal migration to the countries of the European Union through the territory of Ukraine.

The staff of SBGS did not let 7 citizens of Vietnam to enter Ukraine in Kharkiv airport. The potential illegal migrants were identified by the border guards of the Kharkiv Detachment together with representatives of the operational units of the Eastern Regional Department. The foreigners arrived by the flight “Istanbul-Kharkiv”. When passing the border control it turned out that they arrived by the invitation of four Ukrainian citizens who met them at the international airport “Kharkiv”. However, during the inspection, it was established out that they were not familiar and had never been communicating before. It was also found that Ukrainians issued an invitation at the request of a citizen of Ukraine, a native of Vietnam, probably for a monetary reward.

Besides, during the verification of the citizens of Vietnam they were unable to confirm the purpose of their trip and the terms of stay in Ukraine. As it was later established the Vietnamese intended to get to the countries of Western Europe soon in search of a better life. The citizen of Ukraine, coming from Vietnam, may be an organizer of illegal migrants’ transportation to the EU. According to the Law of Ukraine “On Border Control”, the Vietnamese citizens were rejected in entering the country and were sent by the back flight.