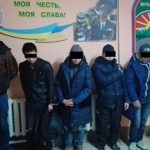 In the frames of the target preventive measures “Migrant” the cadets of National Academy of the State Border Guard Service of Ukraine, who arrived to Transcarpathia aiming to strengthen the combat against the unlawful activity emergence, detained a group of illegal migrants and their possible smuggler. When patrolling the border detail was observing the movement of six persons from the suburb of the village Tysobyken, Vynohradiv district, in the direction of the state line by means of the thermal imaging device. Already in some minutes the cadets together with the reaction group of BD “Vilok”, Mukachevo Detachment, apprehended illegal migrants 50 m before the border, when they attempted to overcome the barrage fence. Detainees were five men and a woman. Only one of the detainees had passport of the Czech Republic. The rest violator reported to be the citizens of Vietnam being without any documents. In the course of further searching actions the border guards discovered also the car belonging to the detained citizen of Czech Republic. The foreigner confessed that he lifted the foreigners who planned to cross the border on Hungary in illegal way. Aiming to undertake filtration measures and drawing up administrative documents all foreigners were delivered to Border Guard Department “Vilok”. The Police staff was informed as to possible constituent elements of offence provided by the Part 2 Art. 332 of Crime Code of Ukraine (Illegal transportation of persons through the state border of Ukraine) in order to make a legal decision on this case. The court will perform a legal assessment of the actions committed by the travelers and their probable smuggler.