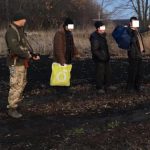 Five violators were detained by the servicemen of the SBGS in the course of last 24 hours when servicing at the Ukrainian-Russian and Ukrainian-Moldavian borders. The border guards of Luhansk Detachment received information and at the participation of operational staff of the Eastern Regional Directorate of SBGS detained three persons attempting to cross the border avoiding the checkpoint. Since the information was received in advance, the border guard had already been waiting for the violators in direction of their possible border crossing. Five unknown persons were apprehended 5 meters before the border. During the filtration operation the law enforcers found that one of the detainees, citizen of Ukraine, born in 1966, had been smuggling across the border. The border violators were called to administrative responsibility under the Art. 204-1 AICU (Illegal cross or attempt to cross illegally the state border of Ukraine). The actions of the citizen made illegal cross of the border shall be subject to the offense under the stipulated article. 332 CCU (Illegal transfer of persons across the state border of Ukraine). According to this fact, the National Police in the Luhansk region was informed.