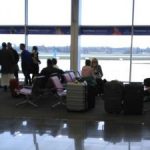 The staff of SBGSU did not let 19 citizens of India enter Ukraine at the Boryspil airport. When undergoing passport control, the foreigners were unable to confirm the purpose of their journey. The Indians arrived in our country by a flight from Astana. In the course of the documentation process they told the border guards about their trip of religious purpose for several days. The foreigners had Ukrainian visas. However, the border guards noticed that the travelers had a lot of stuff. It made them doubt in their participation in the stated purpose of the trip. Considering all the circumstances, the border guards rejected the citizens of India to cross the state border. So far, 9 persons have already been returned by the back flight to the country of their arrival, and 10 more foreigners would be returned to Astana on another day. It should be noted that in the course of 9 months of the current year, almost 300 Indian citizens were able to confirm the purpose of their trip to our country when crossing the border.