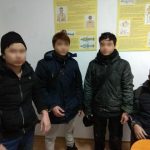 The border detail of BD “Velykyi Bereznyi”, Chop Detachment, detained 4 citizens of Vietnam during the implementation of operative information received in advance in the course of joint patrol with Slovak colleagues in the neighboring areas, close to the state border on the territory of Ukraine. All men did not have any passport documents.

The detainees were delivered to border subdivision for carrying out filtration-verification measures and establish the circumstances of the offense. In addition, the established procedure was applied to the foreigners under Part 2 Article 204-1 of the AICU “Illegal cross or attempt to cross the state border of Ukraine illegally”.

Besides, over the past day the district inspector of BD “Shegeni”, Mostytskyi Detachment received information from a local resident of Lviv region about the movement of two unidentified persons in the direction of the state border. A reaction group was immediately sent to the specified direction to verify the received information, in order to conduct the search and detention of unknown persons. As a result, during the search operations near the border line 2 citizens of Iran were detained having passports.

Currently, the detainees are taken to the Department for the purpose to establish the circumstances of the offense. In addition, the protocols were drawn up in accordance with the Part 2 Article 204-1 of the AICU “Illegal cross or attempt to cross the state border of Ukraine illegally”.